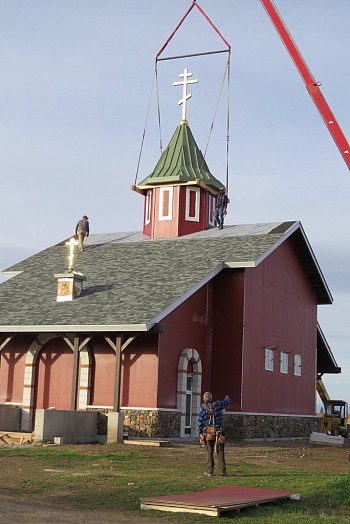 St. Anthony the Great Orthodox Church is a parish of the Orthodox Church in America.  Priests from the OCA (Fr. Paul Janakos and Fr. Eric Tosi) served in the Bozeman area for over five years before the community was formally recognized as a mission in 1999.  Prior to that, the people either drove two hours to Billings or one hour to Butte for services.

From the summer of 2001 to spring of 2012, Fr. Peter Tobias served as the parish's priest.  Fr. Damian Kuolt served as Priest in Charge during 2012 and early 2013.  In June 2013, Fr. David Morrison arrived in Bozeman with his wife Matushka Photini and their three children to serve St. Anthony parish.

As the mission grew, the parishioners purchased land west of Bozeman, paid for it over a few years, and built the parish's first worship space in 2014.  With its new church building and the increase in members, St. Anthony's graduated from mission status to become a full-fledged church in 2017.  The parish includes individuals and families from many backgrounds, mostly converts (an increasing number of whom first experienced Orthodox Christianity at St. Anthony's).

The people of St. Anthony Orthodox Church continue to support the growth of ancient Christianity in Montana.  Parishioners David and Betsy Hicks have donated land near Harrison on which a new Orthodox monastery, St. Peter's Monastery, will someday stand.  They and other members of St. Anthony parish continue to contribute time, labor, funds, and talent to the development of St. Peter's.

This article from the Missoulian newspaper reported on the early stages of work on St. Peter's Monastery.  It includes the thoughts of several St. Anthony's parishioners involved in the project.